A Critique of Vulnerability

Four types of vulnerability that you shouldn’t lean into.

Vulnerablity has become a widely-celebrated pathway to interpersonal growth. But a culture where vulnerability is normalized can be exploited by predatory institutions or individuals. Predators often use imposed or performative vulnerability as a shortcut to, or a replacement for, a more deserved connection. This is especially true in contexts like the startup and DIY music scenes, where vulnerability and confessionalism permeate many aspects of the culture. It’s unclear if these scenes have higher or lower rates of predatory behavior, but it’s certainly the case that people seem more shocked when instances of predatory behavior come to light in these spaces.

In the startup world, the idea of “leaning into vulnerability” may originate from a massively successful TED talk given by research professor Brene Brown, titled “The Power of Vulnerability”. In this talk, Brown says that we deal with insecurity by numbing feelings of vulnerability, and that we should fight this tendency by embracing these feelings wholeheartedly. Over the past seven years this mindset has gone mainstream, leading to “vulnerability” being celebrated regardless of context. 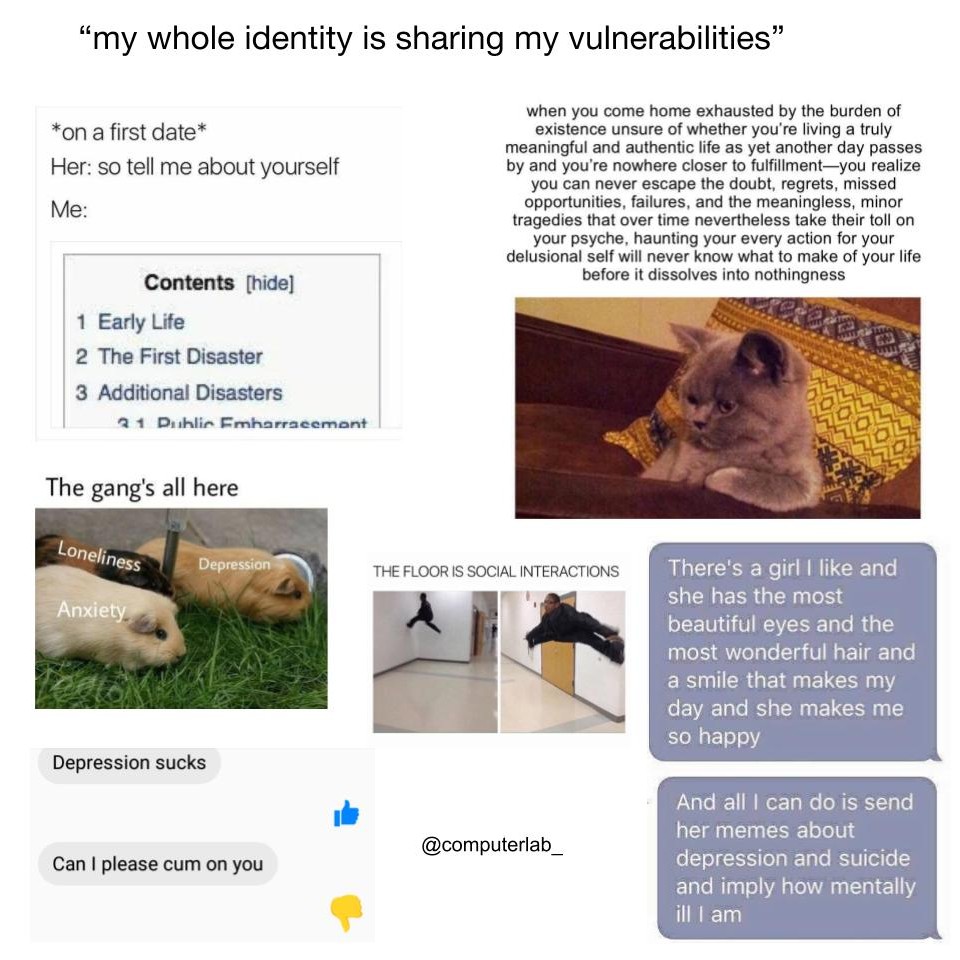 Perhaps we should be more wary of people who loudly brand themselves as “harmless” or “sensitive”. Why would someone need to publicly identify as “gentle”? This also goes for people who broadcast their more uncouth impulses, sexual or otherwise, while cushioning them with indicators of awareness and coyness. The veneer of vulnerability and shame is what builds the trust of onlookers.


alexa send sext: i'm reading the argonauts and i want to choke you


Finally, what does “vulnerability” even mean: is it all about disclosing secrets, taking social risks, feeling helpless, or a combination? We can differentiate types of interpersonal vulnerabilty by identifying the different dynamics at play.

Vulnerability can be experienced in a private way. For example, someone lost in a forest feels helpless, isolated, and may act or think in ways that they normally wouldn’t. Being lost, dealing with an emotionally abusive boss, or experiencing the sublime would make a person feel vulnerable even if they were alone, but when these situations are experienced with others, a whole different set of vulnerabilities tend to surface. Externally induced interpersonal vulnerability occurs when powers beyond one’s control force a group of people to become vulnerable with each other.

In recent years, awareness of tactics like negging and love bombing has increased. Both of these tactics, when effective, trigger a vulnerability script that seeks a resolution. Revealing personal intimacies or traumas establishes a feeling of closeness that isn’t necessarily justified. The victim of weaponized vulnerability feels a need to match their behavior to the level of closeness forced upon them. The weaponized mode of vulnerability is a favorite tool of rapists and abusers, and often goes unnoticed in cultures where vulnerability is normalized.

In some circles, sharing vulnerabilities is the easiest way to have a conversation that isn’t about the weather. Talking about yourself is easy, and in a group of uneasy people, confessing a vulnerability can quickly establish rapport.

Performative vulnerability often lacks the malice of weaponized vulnerability, but its main function is still a means to an end. In this mode, an individual consciously or unconsciously manipulates systems of power to validate their specific vulnerabilities, and a receptive, vulnerable audience feels validated as well. Once a vulnerability has been elevated to the level of art or at least relatable content, it becomes less of a vulnerability and more of an asset.

The mutual mode of vulnerability simply lacks the pathologies of the modes defined above. It’s an essential part of relationships and bonding, but also tends to be unique across different relationships.

You may have heard of “The 36 Questions That Lead to Love”. The questions were created for a 1997 study where professors paired up students and asked them to take turns disclosing increasingly personal information. Much has been made of the fact that the students reported ‘significant post-interaction closeness’ regardless of agreement on important issues, resulting in several improbable marriages.

What mode of vulnerability might have study participants experienced? While the reciprocal nature of the question and response format might appear mutual, the fact that the study was arbitrarily imposed on students by professors during a regular class session means that the dynamic during the interaction would be best classified as externally induced vulnerability.

The questions used in the study have since been widely circulated online for use in team building or relationship counseling. It’s possible to imagine the questions being used by a couple or group in a truly mutual way, but it’s easier to imagine someone using the questions as a sort of elaborate pick up line.

Because interpersonal vulnerability is so polymorphic, it’s important to remain suspicious of situations where you find yourself feeling vulnerable. Blanket celebration of “the power of vulnerability” is dangerous and unproductive, but will probably always be appealing because, as Brene Brown writes on her homepage, “vulnerability sounds like truth and feels like courage”. Compulsively disclosing vulnerabilities only makes sense as a maladaptive coping mechanism for an environment of permanent psychological insecurity.